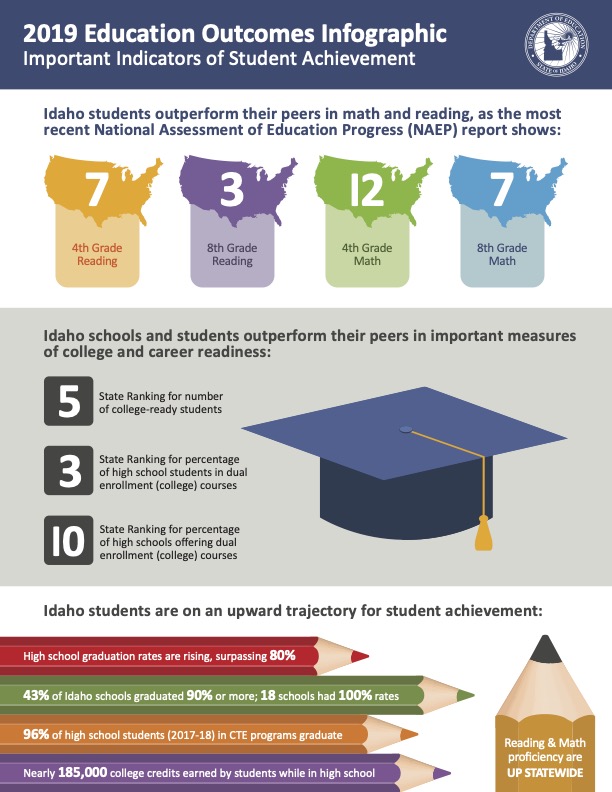 Among all U.S. states, only Indiana and Iowa had a higher percentage of students taking dual credit courses than Idaho in 2015-16, according to this report. The difference was small – 23% and 22.5% compared to Idaho’s 21%. Since then, Idaho has greatly increased its investment in helping students pay for dual credit, participation has increased, and the state may rank even higher in future national comparisons. The same study found 86.9 percent of Idaho high schools offered dual enrollment as of 2015-16, placing 10th among all states and posting a significantly higher percentage than neighboring states. Only four states – Iowa, South Carolina, Hawaii and Georgia – reported 90 percent or more of their high schools offered dual enrollment.

Across Idaho, 80.65 percent of high school students in the Class of 2018 graduated within four years, up from 79.67 percent in 2017. It’s the first time that percentage has exceeded 80 percent. What’s more, 90 out of Idaho’s 210 high schools graduated 90 percent or more of their students in four years, and 18 schools posted 100 percent graduation rates.

6 http://www.sde.idaho.gov/student-engagement/advanced-ops/files/reporting/FY2018-Advanced-Opportunities-Program-Totals.pdf In 2017-18, 25,085 high school students earned a total of 184,794 college credits while in high school.

Final 2018 results for the Idaho Standards Achievement Test show a general improvement in proficiency in both Mathematics and English Language Arts since 2015, the first year of the assessment. The percentage of students who scored in the highest category, advanced, increased steadily over the four years.